Climate is the primary factor regulating the geographic distribution of forest tree species. Due to the slow migration of long-lived tree species, climate change will likely result in a mismatch between the climates that trees are adapted to and the climates that trees experience in the future. Until now, there has been a lack of studies that address this issue in the Asia-Pacific region, where several tree species are important contributors to ecosystem services and key to the social and economic stability of the region. Understanding the viability of these species in the areas they currently occupy and projecting their shift in future periods are essential steps in developing adaptive forest management strategies.

Chinese fir and Masson pine are the two most socially and economically important subtropical coniferous species in China, while Chinese pine is the most widely distributed conifer in North China. Douglas fir yields more timber than any other tree in North America and Blue Gum is one of the most widely cultivated trees native to Australia. Although these five species were the focus for this phase of the project, our modelling technique can be applied to any tree species in any other location.

To develop these models, we used the R version of the Random Forests (RF) algorithm to model relationships between climate variables and the presence/absence of each of the five species. RF produces many classification trees, collectively called a ‘forest’, and aggregates the results over all trees. It generates importance values for each of the predictors, which we used to optimize the model and to identify the climate variables that are important in affecting the distribution of each species. The final RF models were built using an optimal combination of climate variables for each of the four species. We collected climate and vegetation data to generate maps illustrating the current distribution and projected distribution for each species for three time periods (2020s, 2050s and 2080s) based on the most up-to-date climate change scenarios from the IPCC AR5 GCMs. This provides clear visuals of the projected changes in species distribution, as seen in this example of the current and projected distribution of Chinese fir (Figure 1). Note that more maps and detailed results/recommendations will be shared once all findings are published. 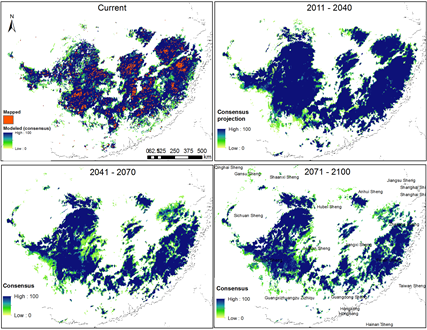 Figure 1. Maps of consensus projections of Chinese fir climate niche distribution for the current (1961-1990) conditions and three future periods (2020s, 2050s, 2080s) using 12 climate change scenarios from IPCC AR5 GMCs. More projections can be visualized using our Google Map based tools. A summary of projections for the 5 important species can be found here.

Modeling the climate niches of forest tree species and projecting their future shifts provides a scientific basis for the assessment of climate change impacts.These maps, including areas both currently occupied and unoccupied but climatically suitable for the species, will be useful for afforestation and ecosystem restoration using these species. Important climate variables identified for each species also help us to better understand the relationships between species distribution and climate conditions. The benefits of this model can be expanded to species and locations other than those examined in this phase of the project, through the application of this model in the next phase and by other researchers. The development of this model has provided a solid basis for the assessment of climate change impacts on these species, and for the development of adaptive strategies in forest resources management under a changing climate.

The process-based, stand-level growth model, Physiological Principles to Predict Growth (3-PG) was introduced to explore biophysical and bio-physiological interactions influencing the stand dynamics of a given species to assess the impact of climate change on habitat loss. It was used complementarily with the niche-based models to gain a more comprehensive understanding of the potential shifts in species’ distributions. 3-PG is not limited in its application to the tree species examined in this project, which include Chinese fir and Douglas fir, and may be implemented for other species in other Asia-Pacific locations in the next phase.

For this study, the 3-PG model was applied to Chinese fir in the regions of southern China using IPCC AR4 GCMs. Modelled distributions under climate scenarios A1B and A2 suggest a northward shift with central China likely to become more suitable for Chinese fir. However, predicted productivity for the expanded areas were very low, which was in agreement with niche-based model predictions. This knowledge will benefit forest managers, particularly those managing plantations. It will allow them to match species to be planted to the regions expected to be within their distribution. This type of planning will allow for long-term sustainability of the forest ecosystems and continued economic benefits from the industry.