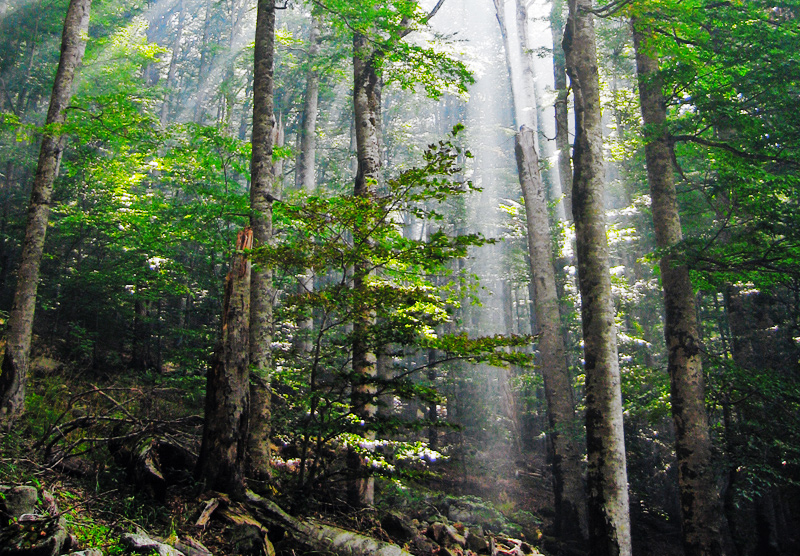 TACA and LANDIS-II models were applied to the Central Highlands Region (CHR) pilot site in Victoria, Australia. Modelling was conducted for 32 Eucalyptus species, although the focus was on Eucalyptus regnans. E. regnans is the most sought after species for timber production in the region and is a key contributor to water production, carbon stocks, and habitat for native wildlife.

These models were used to project the response of species and ecosystems to climate change. The TACA-GEM and TACA-GAP models were used to model the suitability of a site for species regeneration and survival and to estimate the annual net primary productivity and maximum biomass that a species can achieve on a given site under different climate scenarios. LANDIS-II was used to simulate ecological processes such as succession, seed dispersal, disturbance and climate change using regeneration and productivity parameters from TACA-GEM and TACA-GAP, respectively. A meta-model was then employed to assess the ability of adaptation strategies to mitigating the impacts of climate change on forest services. A range of alternative management scenarios were developed and modelled to test the interaction between management, climate change, and ecosystem services.

FORECAST Climate was applied to the MKRF in British Columbia and the Fujian pilot site in China. The principal objective was to assess the long-term impacts of climate change on forest growth rates and mortality, and to develop adaptation strategies for forest management practices and species selection.

The application of FORECAST at MKRF focused on an evaluation of the long-term impacts of two alternative climate change scenarios on the growth and development of Douglas fir, Western hemlock, and Western red cedar. Climate change projections were taken from two IPCC AR5 GMCs, with outputs generated for 2020, 2050, and 2080. This model projects the impacts of climate on tree growth, ecosystem development, and mortality rates through their relationships to temperature and water stress. Annual merchantable volume production was then determined based on the expected growth rate. Additionally, this model projects decomposition rates and nutrient cycling under climate change to further understand how these environmental factors will influence the productivity of the ecosystem. A database of stand-level growth summaries was then generated for use in the landscape-scale analyses. The calibrated model is available for managers to evaluate additional management options and/or climate change scenarios for any tree species of interest.

A similar application of FORECAST Climate was done in Fujian Province, China to simulate the stand-level impacts of four alternative climate change scenarios on the growth and development of Chinese fir plantations. Using the output of this model, a landscape-level analysis of the trade-offs between economic fibre production and ecosystem services in the context of climate change was conducted for a series of alternative management scenarios. This tradeoff analysis will allow the best possible decisions to be made to achieve forest management targets and maintain healthy ecosystems under a changing climate.

The eco-hydrological model, DLM-Ecohydro (BEPS-TerrainLab V2.0), was developed from a Dynamic Land Model. It can be used to simulate annual mean temperature, evapotranspiration, soil water storage, surface and subsurface runoff, as well as gross and net primary production. This model was applied to the Fujian watershed study area in China and the MKRF in British Columbia to simulate the water balance and carbon cycle for a historical period (1980-2010) and future period (2010-2100) using different RCP scenarios.

An analysis of ecosystem carbon dynamics under various climate change scenarios was done for the Pitt River Watershed, which encompasses the MKRF pilot site in British Columbia. Several carbon indicators were modelled using a carbon budget model (CBM-CFS3) including carbon storage capacity, carbon pools size, carbon fluxes, and the capability of carbon exchange with the atmosphere. Forest managers can use this type of information in tradeoff analyses to compare and contrast different management regimes and determine the best approach for maintaining stable carbon stock and achieving sustainable timber harvesting.

This model also projected carbon fluxes for the Pitt River watershed to determine if the region will become a carbon source or sink in the future. This highlights any potential risk of the forest becoming a source of carbon and enables forest managers and policy makers to take proactive measures to return it to a carbon sink.

Several models were integrated in a framework that was applied to the MKRF pilot site in British Columbia. Seven climate-related indicators were selected, as they are expected to show the greatest response to climate change. The multi-value trade-off analysis framework for strategic decision making and planning was then employed to explore and understand the tradeoffs of multiple management scenarios. This framework is able to assess the impacts of different forest management regimes on ecosystem values, evaluate the influence of alternative management strategies on these values and their tradeoffs, as well as address some of the complex effects of climate change on the ecosystem and decision making process.

The final component of this integration was to present information in a simple way through the use of risk classes. This clear display of information will assist managers and general stakeholders in understanding complex forest management issues, how to deal with these issues, and the risks they face when dealing with them. Although this framework was applied in Canada, these tools can be used in other Asia-Pacific location.

This model integration framework provides a tool for forest managers to determine the best management strategies to achieve SFM objectives in the context of climate change. It considers broad objectives, such as conserving biodiversity, combating climate change, carbon storage capacity of forests, and respecting aboriginal culture and rights, as well as more standard objectives such as timber volume and revenue. The trade-off analysis is complex enough to be used by those who are very skilled in this type of analysis and have access to detailed information, but is also simple enough to be used by those with less experience and less complex information. This framework provides managers and decision makers with straightforward methods to quantify the individual or combined benefits and tradeoffs of multiple, potentially conflicting objectives.